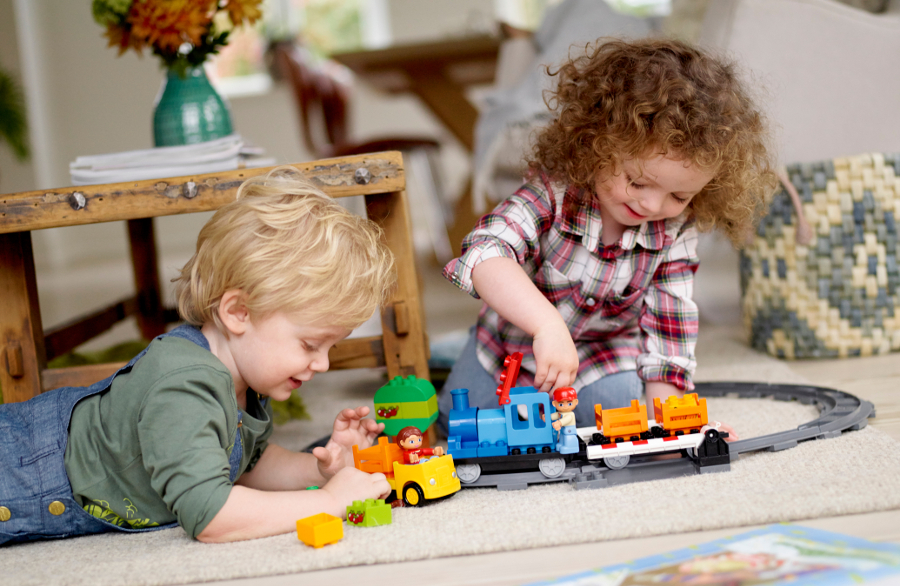 Our fast-paced technological age means that kids are spending more time in front of a screen and less time learning to solve problems with their own hands and ingenuity.

Technology certainly has its place and knowing how to use it is an essential skill for kids these days. But so too, is the ability to create, discover and learn spatially.

We’ve all heard the long list of benefits of LEGO® play. Not only does it improve fine motor skill, (an essential and often under developed skill in young children), but it also helps kids to interact well with each other, forming relationships based on sharing and teamwork.

It can be about teamwork or solo problem solving. It can be totally fantasy-driven, focused on free-building to create whatever you dream up, or it can be about following instructions.

It’s about being in the moment

Playing with LEGO® blocks and sets is always interactive and demands focus right then and there. Watch any young child absorbed in their LEGO® building task and you will understand the importance of losing yourself in the creation so completely, discovering the laws of physics and geometry and the wonders of creativity along the way.

Visit our stores to discover, play and learn

That’s why we’ve taken care to set aside interactive play areas in three of our four stores. We also hold regular LEGO® builds, as all of this encourages kids (and adults!) to immerse themselves in the wonders of LEGO® play.

These school holidays, stop by our stores in Habitat Centre, Somerset West, Blue Route Mall and Willowbridge Shopping Centre where you’ll find piles of LEGO® blocks to build from. It’s a good diversion for the kids, and by good, we mean genuinely constructive learning through play!

Our interactive areas are always overseen by a designated Kiddiwinks staff member, and we encourage parents to stay and even join in.

Find a store near you by visiting shop.kiddiwinks.co.za 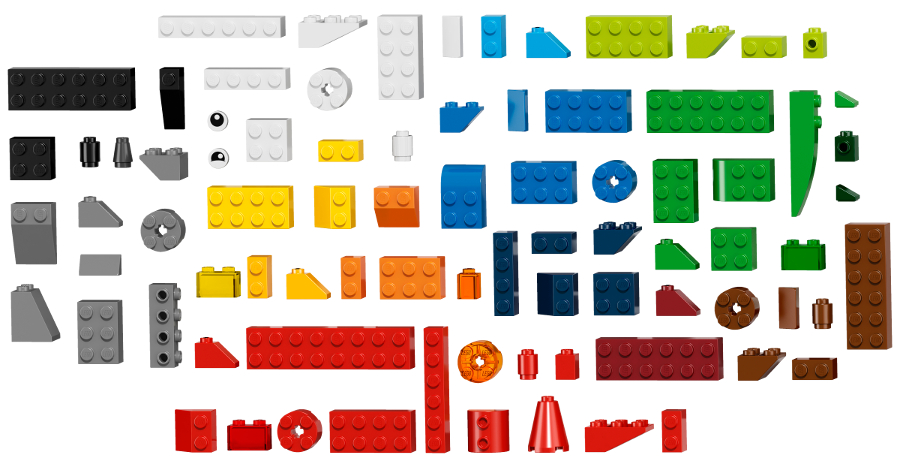 Did you know that 33 000 bricks are manufactured every minute at LEGO® factories? That might seem a lot, but it’s just enough to keep up with the ever-increasing demand for this sought-after toy. The LEGO® brick’s simple design makes it versatile and so precise that it remains unrivaled over the almost 60 years it has been in production.

The two basic components that make a LEGO® piece unique are its studs on the top and the tubes within. The studs are a little bigger than the space between the tubes and the walls, so that when two pieces are pressed together, friction works to keep them together.

“Our products have undergone extensive development over the years – but the foundation remains the traditional LEGO® brick.

The brick in its present form was launched in 1958. The interlocking principle with its tubes makes it unique and offers unlimited building possibilities. It’s just a matter of getting the imagination going – and letting a wealth of creative ideas emerge through play.” – The LEGO® Group

This smart design means that you can build anything from a basic LEGO model airplane to a giant LEGO® sculpture, or in James May’s case, even a full-size LEGO® house in the country.

LEGO® parts are made from a durable plastic called acrylonitrile butadiene styrene (ABS) and are created mechanically, via robots which inject molten plastic into moulds.

The ABS comes in a granule form and is melted down at 232 degrees Celsius before being injected into the moulds. The moulds are extremely accurate, which is how LEGO® bricks are so uniform. The mould precision tolerance is as little as 0.002 millimeters, according to How Stuff Works.

Once injected into the mould, the ABS is compressed at a pressure of between 25 and 150 tons. It takes just 7 seconds for the LEGO® piece to cool sufficiently to fall out onto a conveyor belt and into a bin to be sorted.

When it comes to quality assurance, LEGO® has a thorough process. Drop, torque, tension, compression, bite and impact tests are mechanised all to ensure that pieces are safe and sturdy.

“Technicians use a measuring beaker to determine whether pieces could cause a choking hazard for small children. For every million LEGO® elements, about 18, or 0.00002 percent, fail to pass the tests.” – How Stuff Works

Perhaps that’s why a LEGO® piece is almost indestructible – and why it hurts so darn much to step on one! In fact, Software developer and LEGO® fan Phillipe Cantin conducted an experiment to find out just how much force you’d need to exert on a two-by-two brick before it gave out. It turns out you’d need the equivalent of 950 pounds of pressure for it to give way.

So, not only is the LEGO® brick built for versatility, it’s also built to last, making it one of the most outstanding toys out there.

Visit the Kiddiwinks online shop or find the nearest Cape Town store near you to find the LEGO® sets you love! 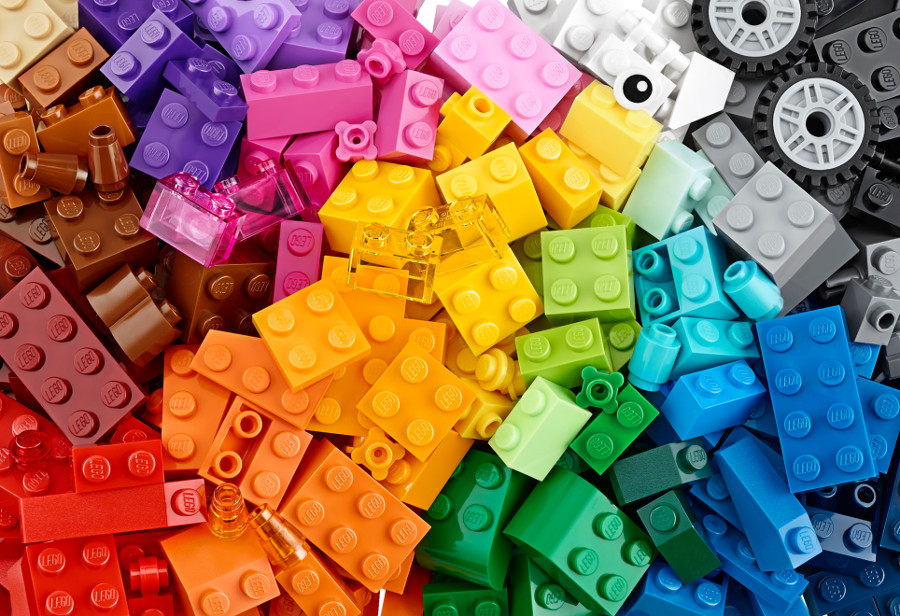 From time to time, your LEGO® collection will need some freshening up. We take a look at various methods that people of the web have shared, as well as a few ideas of our own.

What The LEGO® Group says

First off, The LEGO® Group recommends that you wash your LEGO® blocks by hand using a mild detergent (something akin to Sunlight liquid) in water temperature of no more than 40℃. They add that you should take care to rinse the detergent off properly to avoid any discolouration. Let them dry naturally, or carefully dry each brick using a soft dry towel

This one is for those badly soiled LEGO® bricks. The LEGO® Group recommends that you use a very mild bleach and perhaps it’s worth also saying that you shouldn’t leave the bricks in to soak for longer than a few minutes.

Older bricks tend to yellow if exposed to too much sunlight – especially the white, blue and light grey LEGO bricks. You can rectify this using hydrogen peroxide. According to Brothers Brick, the bricks undergo a chemical reaction to the H2O2, that effectively helps to bring the colours back up. You can get 100ml bottles of hydrogen peroxide from Clicks for about R16. Here’s a step-by-step whitening method that AFOL John Tooker swears by. 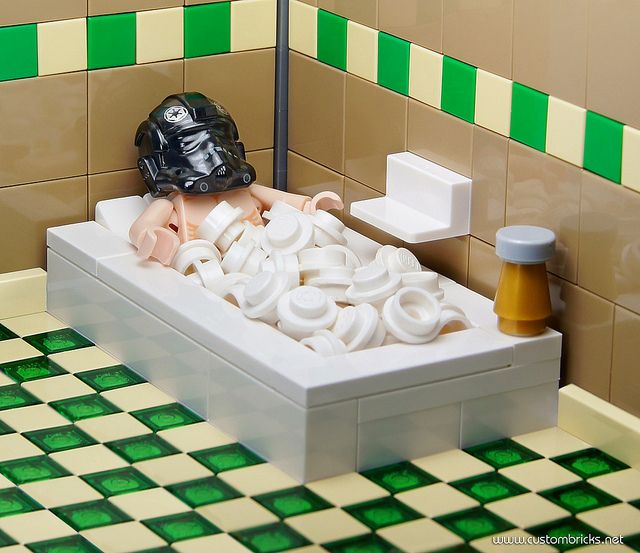 Stick ‘em in a laundry bag and into the washing machine

If you’re pressed for time and needing a quick cleaning solution, then this might appeal to you, however, be warned that there’s a high chance that your bricks will sustain scratches. The LEGO® Group itself warns against putting your LEGO® bricks into the washing machine or dishwasher. But, some LEGO® users attest to this method, adding that they run the machine on a lower temperature wash. This LEGO® cleaning method is probably used most by parents that need a way of getting sticky food stuff off their kid’s LEGO® bricks quickly and with the least elbow-grease.

Since tiny scratches show up more on the transparent LEGO® pieces such as windshield, so do keep them separate when you give your LEGO® bricks a good clean. To restore these pieces back to a shinier version of themselves, someone has discovered the wonders of wood floor cleaners. Andy Taylor has written an entire post on the subject over at The Brick Blogger, offering a step-by-step guide using Pledge WoodCare. It is the liquid acrylic that you want, which Andy later explains is “a clear very dilute acrylic medium based floor polish.” 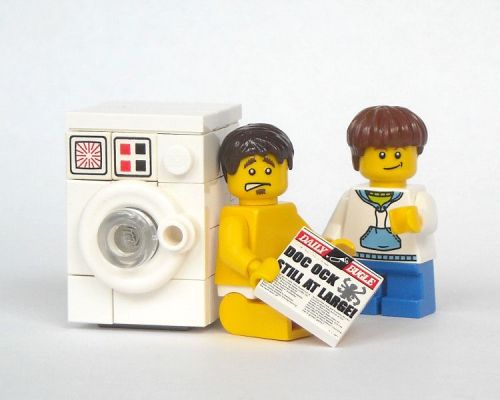 In order to keep the printed details of your minifigures intact, it’s critical that you take the utmost care when you go about cleaning them. Ebay has a great post on how to clean vintage minifigures, which is worth applying to newer minifigures.

Got any other LEGO® cleaning ideas up your sleeves? Share it with us in the comments section below.