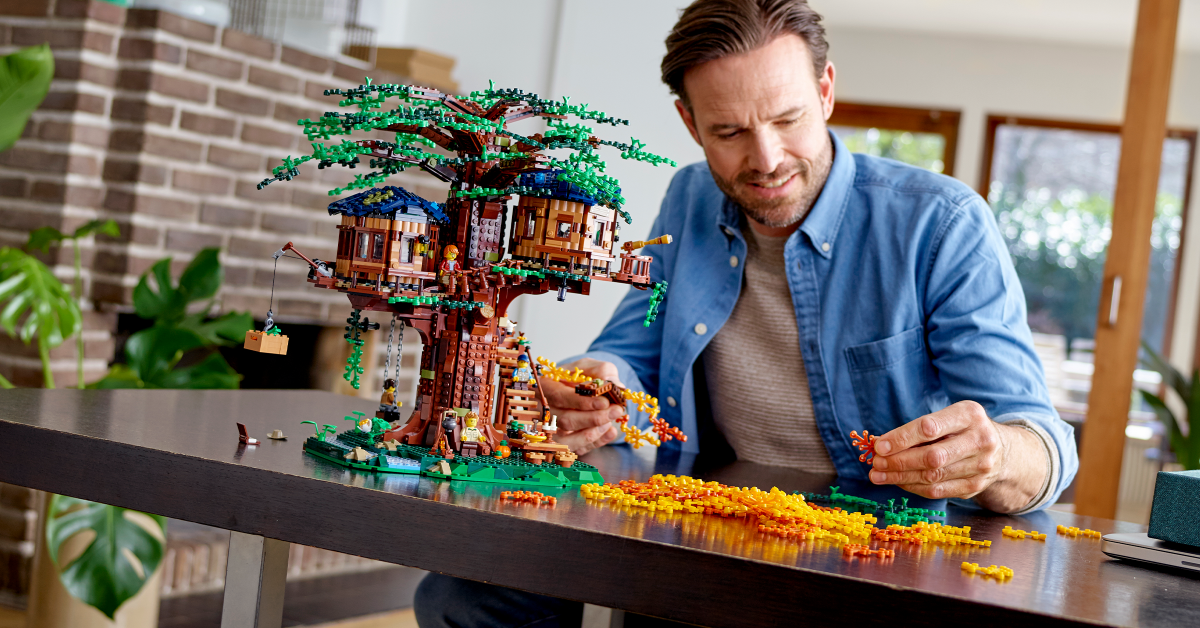 The LEGO Group’s commitment to becoming more sustainable goes to the heart of the matter: the LEGO® brick. Together with a dedicated team of scientists and a $150-million investment, they’re on the hunt to change the recipe to their trusty LEGO® brick to use only plant-based or recycled materials. How far have they got in the almost eight years they’ve been at it? Let’s take a look.

What is The LEGO Group doing about becoming more sustainable? The simple answer: they are working to change the ingredients of their brick to plant-based or recycled materials by 2030. The group’s one major challenge is to ensure the new brick recipe yields as high quality a product as the old bricks. It’s a tricky process, but one that the company has shown clear commitment to in the past few years, culminating in the 2019 release of the 3036-piece LEGO® Ideas Tree House (21318) with 180 leaf elements made from polyethylene, a plastic made from the ethanol derived from sugar cane husk. So far, this is the highest number of sustainable bricks ever used in a LEGO® set.

The group’s drive to become sustainably minded spills over into a consumer education campaign called LEGO® Plants from Plants in which its hero, Plantus Maximus, leads the way in helping to save the planet.

On its website, the campaign challenges LEGO® fans to “build sustainable superheroes and and join Plantus Maximus on the mission to protect the planet.”

In an interview with the New York Times, Tim Brooks, The LEGO Group’s vice president for environmental responsibility, says the company emits about one million tons of carbon dioxide annually – 75% of which is from the raw materials made to use the LEGO® brick. A more sustainable alternative would greatly reduce the company’s carbon footprint.

The LEGO Group appears to be one of the leading international brands working towards more sustainable practices, driven in no small part by its customer base.

“We can’t say we inspire and develop the builders of tomorrow if we’re ruining the planet,” Brooks told The Wall Street Journal.

So determined are they, that a task team of technicians was set up just over seven years ago that has already tested approximately 200 materials. But its stringent requirements for quality make settling on a material difficult. Wheat-based materials don’t take on the vivid colours associated with the LEGO® brick, while corn-based materials tend to be too soft. Other materials might not click and stay together easily or simply break in test environments.

“The bricks have to be able to stick together. They have to be able to be broken apart without using special tools. We want the same shininess of the bricks. It can seem like quite a simple task, but it’s quite an engineering challenge, to make it so that the [sustainable] bricks can be fit together and taken apart without stretching or dissolving or things like that,” Brooks explained to NBC News.

Polyethylene is suitable for some types of LEGO® bricks but not all, which is why the Tree House leaves are made from it but not much else just yet. This material tends to have a slight pliability which you won’t want in your 2×4 brick.

While The LEGO Group’s task team has a way to go in discovering and rolling out its new, more sustainable LEGO® brick recipe, it continues to find ways to reduce, re-use and recycle, claiming to have recycled 93% of waste from its operations in 2018.

“100% of all plastic waste produced during the moulding of LEGO® bricks was recycled. This includes reusing some of the plastic resin in our own processes, as well as sending some of the waste to suppliers to be recycled and turned into other plastic products.”

Moreover, the group makes use of renewable energy supplied by wind farms in Germany and the UK – all due to investments made by the KIRKBI A/S, the parent company to The LEGO Group.

“In 2018, the energy output from our investments in renewables was greater than the energy used at LEGO® factories, offices and stores.”

As exclusively LEGO® shops, Kiddiwinks is just as committed to improving its own sustainability practices. This includes no longer offering single-use plastic bags with purchases, having replaced them with reusable fabric bags, as well as offering an email alternative for till slips. It’s a step in the right direction – one we remain determined to continue improving in the hope that it goes some way to ensuring a better future for the younger generation.

Got suggestions? If you have any ideas for how we, Kiddiwinks, can become more sustainable, we’d love to hear about them. Feel free to send us an email to sustainability@kiddiwinks.co.za