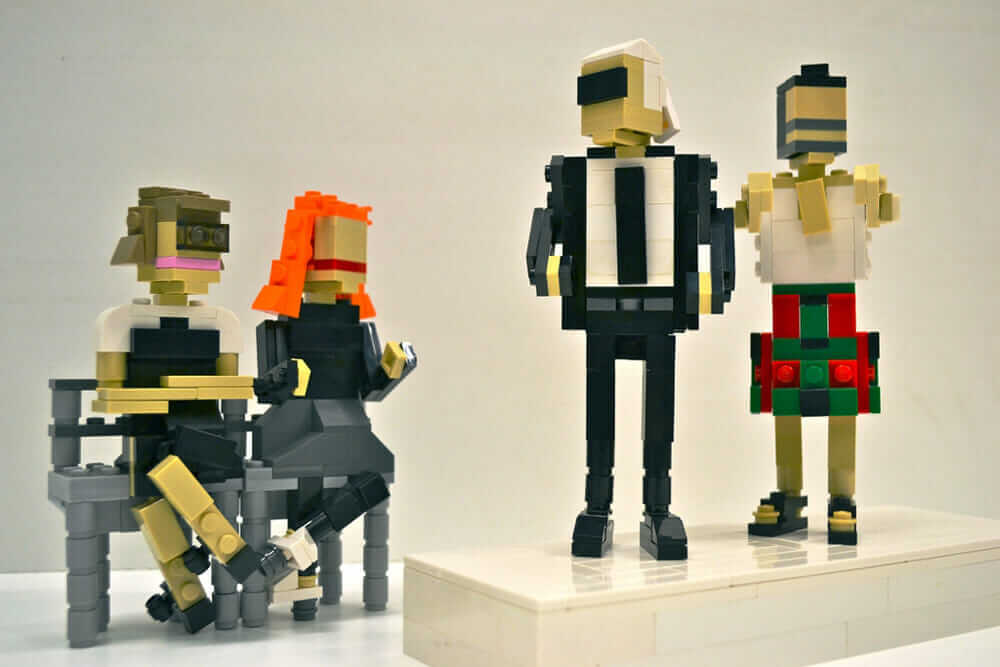 Aside from building models for a living at her company Bippity Bricks, Finch also contributes to a range of social projects including Women’s Brick Initiative (WBI) which began in 2018 in collaboration with Shelly Corbett and Jacqueline Sanchez. WBI aims to inspire girls and women to build with LEGO bricks.


We want to demonstrate that the simple plastic brick can be used in a variety of creative ways beyond traditional building.

We love her recent project for the United Nations Refugee Agency which highlights the plight of refugees worldwide.

She has also been a part of the production of a range of LEGO-related books as an author or featured builder, including The LEGO Architecture Idea Book and LEGO Awesome Ideas.

Mariann Asanuma had wanted to be a LEGO Master Model Builder since childhood. Her determination and talent mean that not only has she worked at LEGOLAND California, but she has since gone on to create her own company, Model Building Secrets, building, writing and supporting LEGO and LEGO-related projects.

Her work ranges from custom builds to replicas, on site building events to picture mosaics and so much more.

In 2018, the young and talented Michelle Thompson beat over 7000 applicants to become a LEGO master builder at the LEGOLAND Discovery Centre in Birmingham, UK. Her background as an HR assistant might seem somewhat unrelated, but as Thompson points out, she’s built LEGO models all her life and it so happens that General Manager Amy Langham was blown away by Thompson:

“She’s creative, she loves LEGO and she can build – it’s what many people brought to the table but Michelle went beyond what we hoped for with this infectious ability to excite and engage others. She really is the perfect person for the job and worthy of the Master Model Builder title.”

“LEGO has always provided me as an outlet for my creativity, especially as a child. Now I hope to inspire and inject the same passion I’ve conjured up over the years to many, many others,” she told What’s On Midlands.

Her role as the official Master Model Builder will entail constructing displays, curating exhibitions and sharing her infectious passion for LEGO building with young and old fans alike.

If you were ever in doubt as to just how creative one can get with a LEGO brick, you’ll doubt no more once you’ve laid your eyes on Veronica Watson’s creations. As a former LEGO Master Model Builder for Westchester, UK, Watson used LEGO bricks as her art medium. She’s well known for recreating iconic scenes using LEGO bricks such as Picasso’s Guernica, Beyonce’s Lemonade album and iconic tennis player Serena Williams in action on the court.

Having graduated with a degree in architecture, the young master model builder applied her technical skills to the brick.

There is definitely a big crossover between architecture and LEGO. Ironically, I don’t typically build architecture-themed models.

Just like all of us amateur builders, Watson admits that a brick separator is a useful tool to own: “One thing that’s pretty handy is a brick separator… it basically just saves your fingernails.”

According to a recent report by Boston.com, architectural graduate Megan Amaral is North America’s only female Master Model Builder, and just one of the three women in this role worldwide. Encouraging other young female LEGO fans to dream big is part of her mission.

“I always like to bring that up to be like, ‘Look, you could be the next female Master Model Builder when you grow up, because right now there’s only three of us in the world and you should go for it — keep building,’” she says.

She’s intent on bringing a female perspective to builds and aside from her work on the general displays at Legoland Discovery Center Boston, she designs a few of her own builds, where colour is a strong focus.

“A flamingo is not just one shade of pink, it’s two shades of pink and they have to work together,” she explains.

Got any other suggestions of women in LEGO we should be following? Leave your suggestion in the comments below.